Have you ever found yourself wondering what haircut you should get for your son? Hair is a big deal to me. I want to share with you some of my ideas I would suggest for your son’s next slick haircut.

What are some great haircuts for boys?

Okay so now that I’ve thrown a lot of random phrases at you, let me explain each of the haircuts. Let’s dive in!

I’m gonna be a bit biased here and say that this is my favorite haircut of them all. I love the look of this. I am currently working towards having this haircut myself.

Have you ever seen Grease? Probably. John Travolta rocked this hair. Same with people like Elvis Presley and James Dean. There are many variations of this style that you can choose from. It’s fairly versatile. It a cool-cat look but also classy. A straight up Fonzie.

This only thing is, you have to really be committed to this haircut. It’s something you have to work at and keep nice. It looks great but that is only because someone has put in the time to make it that way.

If your son isn’t willing to sit through you fixing it up or having a blow dryer in his face, then he should not have this.

Another thing I should mention is that you son will need really long hair. It has to be fairly long on top. I’ve been working to have this haircut since July. It’s been about 5 months. My hair was already fairly long at the time. It takes effort.

The combover is the haircut you can never go wrong with. It looks nice and it’s classy. It will look adorable on your son.

On top, it’s a little longer than the sides. The sides blend into the top for a soft look. Sometimes you can raise the front a bit. You usually comb the front in the opposite direction of the rest of the hair. This gives it a bit of a bump.

There are messier ones out there that you can look up. Ones that don’t blend as smoothly to give an ier or messy look. If you want a clean cut simple look for your dapper son, this look is perfect.

This haircut can also be done with a hard part or just a normal part. It can go without the blend. This will look even more proper.

A combover works great with all lengths of hair. It’s really simple with short hair. With medium or long hair you can do more. The longer, the more versatile you can be.

Slicked Back Side Part

This haircut is similar to the pompadour. It’s just without the fluff and volume. This is a nice gentleman’s haircut.

It is generally done with medium to long hair. It is… well slicked back (Wow. who would have thought?) and it holds well with some pomade. It’s not as much work as a pompadour but it still looks nice.

It’s a softer finish than the pompadour. It’s sophisticated so if that is what you are into, go for it!

There generally is a part in a slick back. It there to break the hair when the direction of the hair changes. Everybody’s hair parts differently.

If your hair is curly or really wavy, a slick back won’t work. It looks best on straight hair. You might be able to get away with it having curly hair. It might end up looking awesome, but I wouldn’t recommend it if you just want something nice and simple.

This haircut along with the pompadour looks so nice with dark hair. The darker the hair, the more it will pop. Keep that in mind.

This is the perfect haircut for your little bad boy! There are some crazy ways you can do a mohawk. Let’s talk about them.

This is more a sporty haircut. You wouldn’t want this if you were going for the gentleman look. It’s too extreme. This is great for little boys because they aren’t really in the market for gentleman looks.

If your son likes sports or is getting dirty outside always, this might not be a bad option. It will fit his MO.

The mohawk is pretty versatile. You can do plenty of fades. You can square off the forehead which will make the style really sharp. Some have shorter mohawks and other’s have longer.

I think one misconception is that mohawks are these crazy 90’s thing that should die with the 90’s and their style. Mohawks do not have to be skinhead with huge spiky hair in all colors of the rainbow.

I have actually seen some nice mohawks and I think that the style has potential.

Up until this point, I have only talked about hairstyles that generally are focused on what the top of your hair looks like. A High Fade is an addition to the top of the hair but I think that it has much relevance today, so I wanted to share.

A fade is how the hair up the sides fades into the length of the hair up top. It looks really cool and as it grows out, it keeps its form.

A High Fade means it’s mostly skin at the bottom of the side, like around your neck and cheekbone area. With a High Fade, the hair isn’t really noticeable until it’s almost connected with the top of the hair.

This style has become extremely popular because it stands out and it’s a fresh idea. It can be used with so many hairstyles which is another reason why it gained such popularity.

The Tapered look is another nice gentleman haircut. It looks great with a hard part as well!

This is another one of those haircuts that looks good with a pomade. Basically, any “gentleman” haircut is going to use a pomade. Just know that.

Once again, this haircut needs to be styled so if your son can’t handle sitting there while it’s being fixed, then this is not for him. It’s a classy, sharp look.

So what sets it apart from other “gentleman” hairstyles? This kind of hairstyle is meant to fade or blend in a lot more than say a pompadour is.

We know the pompadour is big but this one is trying to be subtle about it. It looks really nice and if you want to make your son’s hair look smaller, this is a great one.

This is the ultimate “my son plays sports” haircut. Which is why it is sometimes referred to as an active style haircut.

You know these haircuts. The ones that being a little boy is all about. The little spike in the front. Maybe a little wave. It’s just the classic look for a little boy and whatever little dudes do.

It’s a blended haircut. It does not take much effort (you can thank me later) and it works pretty well with any kind of hair or cowlick you can think of.

If you want a simple classic boy haircut, Spike/active style is the one for you.

I always think of boy bands when I see this hairstyle. Which is neither good nor bad. It is generally a roughed up hairstyle. Kind of messy and unkempt.

The great thing is though that you can comb it and fashion it to look nice and tidy. So if somebody is getting married or you end up at a church service one day, you don’t have to get your little guy a new haircut.

It’s just a great haircut. I love it.

This is for your perfect, blond-haired Cali dude who happens to be your son. This is a great hairstyle if your son has long hair.

I’ve seen lots of little guys with this and I must say, it looks good. It’s simple. You don’t have to do anything. It lays nice and they can fix it for themselves.

If you don’t want to hassle, I would say go for it. It’s simple and you don’t have to worry about a single thing.

Should you shave your child’s head? Well, I mean, it is up to you. You are the parent. I would not recommend it though. It might look weird and if they have hair, you should just use what they have.

I think my biggest concern about that is during the winter months the hair gives heat to the head. They will lose that without hair and I doubt your kid wants to wear a hat all the time. It’s just not a good idea. 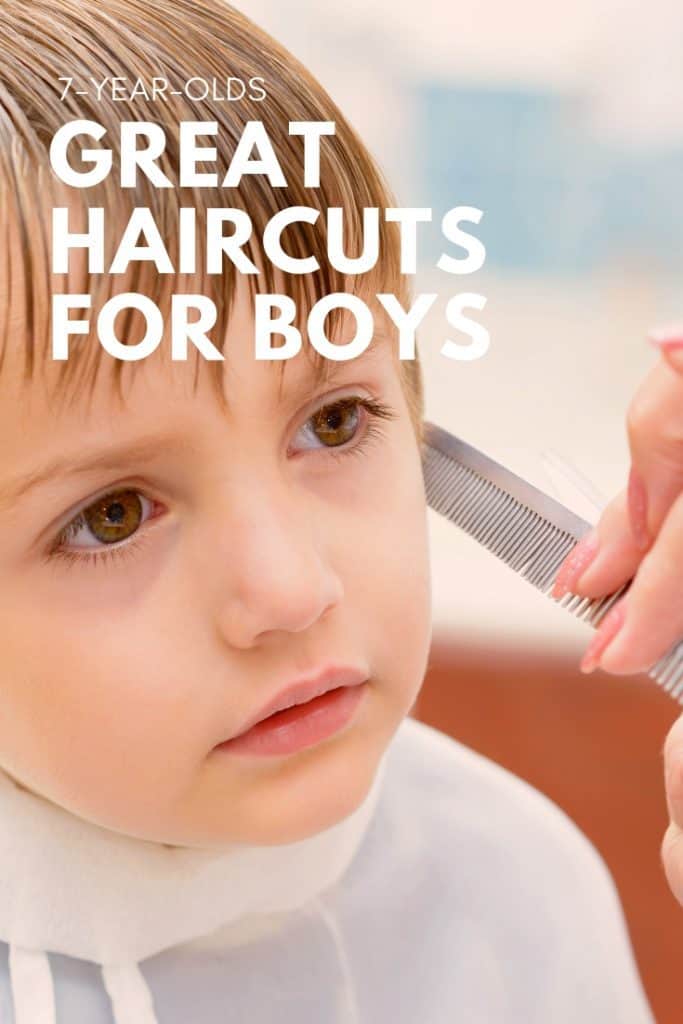