Can 7-Year-Olds Get Pimples?

It seems like an early age if 7-year-old kids start getting pimples, but is it really that uncommon? Can 7-year-olds get pimples? With this question in mind and with the help of a licensed Pediatrician I have found some answers.

So, can a 7-year-old get pimples? It used to not be super common for 7-year-olds to get pimples, but along with the onset of menses (periods) and body odor acene has begun showing up earlier and earlier than it has in the past.

With signs of puberty happening earlier and earlier it can be concerning as to whether or not it is healthy that your 7-year-old has pimples. So I did some more research and found some answers that can be very helpful.

Can 7-Year-Old Children Get Pimples?

It used to be more uncommon for 7-year-old kids to have things like pimples and periods and other signs of puberty, but early puberty has become a common thread between children.

These physical signs of early puberty are easy to see and address but there can be social and psychological issues with children who start puberty earlier than their peers.

They can be teased, bullied, or left out because they look different than all the other kids their age. It is important to council with your kids if they are going through early puberty so that they have a support system.

If My 7-Year-Old Child has Pimples What Should I Do?

It can be hard to know what to do if your kid starts to show signs of early puberty, like getting pimples, at the age of 7. There are a lot of good things to do if you start to notice these signs.

One of the first things to do if you recognize that your 7-year-old has pimples and acne is to take them to the family pediatrician or family doctor so that they can be tested for a condition called precocious puberty.

Monica fisher discribed the difference between percocious puberrty and early puberty as,“Precocious puberty” is used to refer to a pathologic condition, while “early puberty” has become lots more common.

Precocious puberty simply is an early onset of puberty. So, breast development and periods for girls and the enlarging testis and penis as well as a deepening voice for boys.

If a doctor finds that your child is experiencing precocious puberty they will normally prescribe a medicine that helps to slow down these developing signs of puberty.

If your child is showing early signs of puberty like acne there can be a lot of decisions on how to go about helping your 7-year-old child. Deciding when to allow them to use acne cream is a big decision.

Is it Okay to Let My 7-Year-Old Child Use Acne Cream?

There is a big debate going on right now of whether or not younger kids should be able to use acne creams and treatments. The way that the medical field is standing currently is pretty straightforward.

Doctors are not allowed to prescribe acne cream to 7-year-old kids and most children. That is a huge clue that the chemicals in acne treatments are not meant for little kids.

Also, most over the counter acne treatments have an age limit requiring that its users should be at least 12 or over in order to be using acne products. This also adds to the idea that acne treatments are not meant for 7-year-old kids.

Pharmacists and doctors will agree that the skin of 7-year-olds is too sensitive for the chemicals that are in acne creams and treatments. While allowing your 7-year-old to use acne cream may not hurt them it is definitely not good for them and is suggested against.

How Can a 7-Year-Old Kid Get Rid of Pimples?

Since it is not recommended that children under the age of 12 use acne cream and products, and it is not necessarily good for them to try those products and creams, the question becomes how then can I help my 7-year-old kid get rid of their pimples?

One of the best ways to help your 7-year-old child get rid of their pimples is by teaching them the proper way to wash their face. That way they can learn how to help themselves.

The best way for 7-year-old kids to get rid of their acne and pimples is by washing their face with warm water and soap about twice a day. Make sure that they are not using overly scented or perfumed soaps.

While they are washing their faces it is important that they wash them gently and never scrub. Scrubbing your face while you have pimples or acne can actually make it worse instead of better because you are irritating the skin.

Another tip to teach them is to use their hands to wash their faces instead of washcloths. This is important because washcloths can be ruff and cause irritations while using your hands will bring a gentle approach that will promote cleansing and healing.

This washing habit is best for 7-year-old kids because it helps cleanse their faces and clean their skin without damaging it with products and chemicals that are bad for them.

7-Year-Old kids have rather sensitive skin and so their treatment options need to be sensitive. As your 7-year-olds grow and become adults then it becomes okay to let them use acne creams and products if they want it.

What Do You Do if Your 7-Year-Old Kid’s Pimples are Hurting?

Pimples can be painful and irritating especially for little 7-year-old kids who don’t really know what pimples are and why they are being hurt by these dots on their faces.

An important thing to tell them first is explaining simply what pimples are, how people get them, and then go over washing procedures so that they know how they can help get rid of them.

After that, it is important to tell them that they should try not to touch their pimples because it can make them worse. This can be hard but it will help the pain go away.

There is no heal all when it comes to acne pain, but there are two suggestions that people have that are meant to help ease the pain caused by pimples.

The first is to gently apply a warm compress or cloth to the pimple that is hurting and let it sit for a while. This is said to help open up the pores so bacteria can get out and to dull the pain.

The second suggestion is literally the opposite if the first and that is to wrap an ice cube in a very soft towel and rest it on the pimple. After a few minutes you can move it around a bit or if the pain is gone you can take the ice off.

There really is no way to fully stop the pain that comes from pimples, but by keeping your 7-year-olds face properly washed and keeping them from touching their faces can help them heal faster which will help with the pain.

Why do pimples hurt? Pimples and acne hurt because they have become inflamed. The inflammation can cause pain because it is surface level or because it is deep and close to a nerve. Sadly the more inflamed the pimple is the more pain it will cause.

How do you get pimples? Pimples occur when pores get clogged with dirt, dead skin cells, sebum, and/or bacteria. That bacteria then begins to reproduce causing redness and pain. 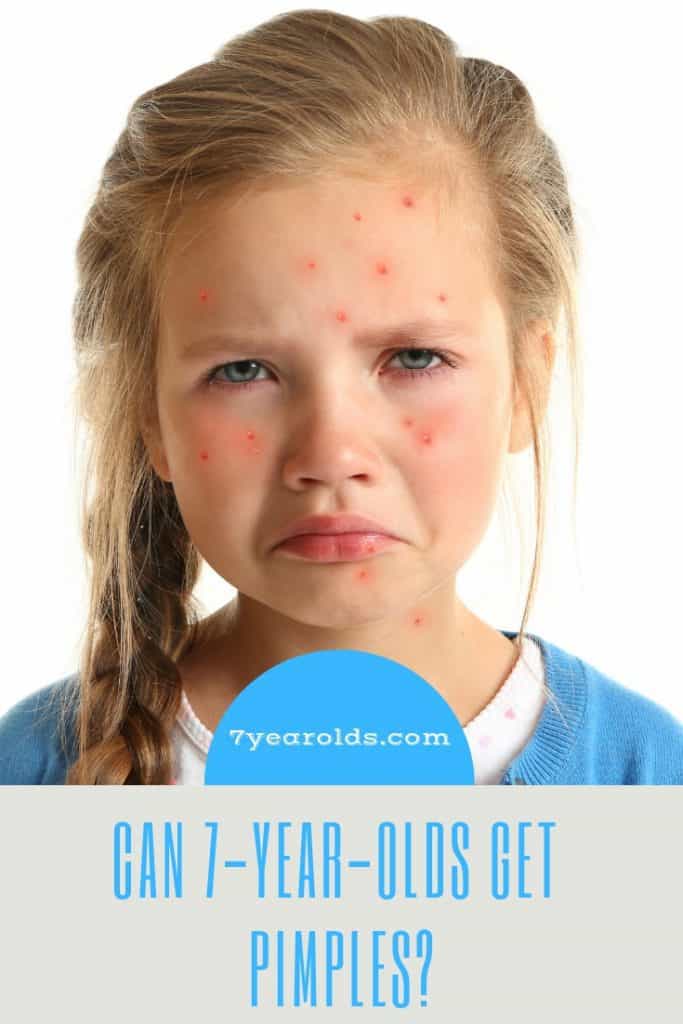 Can 7-Year-Olds Get Cradle Cap?

What Basketball Size is Best for a 7-Year-Old?

How to Teach a 7-Year-Old to Code

Average Height of a 7-year-old in Feet

Can 7-Year-Olds Get Cradle Cap?

Do 7-Year-Olds Get Molars?

Can 7-Year-Olds Get Yeast Infections?

Can 7-Year-Olds Get Headaches?

What’s the Best Toothbrush for a 7-Year-Old?

This site is owned and operated by Elli & Tee Inc. 7yearolds.com is a participant in the Amazon Services LLC Associates Program, an affiliate advertising program designed to provide a means for sites to earn advertising fees by advertising and linking to Amazon.com.