When I was seven, I was a little petrified about being arrested. Isn’t every little kid worried about breaking the rules? Well, now that I have a few more years under my belt, I’ve decided to lay this to rest once and for all.

What would lead to a seven year old being arrested? How often does it happen? Why do these arrests rarely pan out? What does this mean for our society if we keep arresting kids? I’m going to go more into that in the article below.

Circumstances Where a Seven Year Old Would be Arrested

There are cases as recent as January of this year of children being arrested. Surprisingly (or maybe not surprisingly at all), most of these arrests tend to happen in Florida.

In January 2018, a teacher scolded a first-grade boy for playing with his food in the cafeteria during his lunchtime and asked him to show better manners. His response went far beyond the worst you would have thought. He surpassed the smart aleck remark and instead lashed out at his teacher.

When the boy was removed from the lunch room for being difficult, he punched his teacher repeatedly in the back and pulled her hair. When they both fell to the ground, he began to kick the teacher multiple times. He was uncontrollable.

Nobody could help the boy calm down, so they did what they though they had to; they called the police on him. When the police came, the managed to get the boy under control, handcuffed him, and drove him away in a standard police squad car.

This seems almost like fiction. I would never imagine that somebody would find it necessary to ever arrest a small child. But it did happen, and it has been happening for years. In fact, in just 12 months, Flordia police have arrested 100 children aged 5 and 6. Why would this happen?

Most cases involve an out of control kid who presents a danger to others around them. Most cases have  injured people left in the wake. When the children can’t be calmed down, those in charge of them see no alternative and seek for professional help to contain the child.

Why do the police seem like the only option? Well, from a young age, many kids are taught to fear the police. They see the police as bad people who take worse people away. They are scared of the police because they know that a police officer’s presence means that somebody did something wrong. So when they see a police officer, they naturally submit to them for fear of being punished. When at their wit’s end, adults call in for backup.

Young children are sometimes arrested at the behest of their parents. There was a woman, again from Florida, that called the police on her six year old sun after he kicked her in her stomach. She was pregnant. She called the police as a way to teach her sun a lesson.

So if 100 young kids are getting arrested in the course of a year, why isn’t there an entire ward full of children? Why isn’t there a Netflix Original reality television show already three seasons in?

Well, the simple answer is, no judge can sentence a small child to jail and still sleep well at night. Could you? Jail is just no place for a kid. I mean, if we have juvenile detention for teenagers to keep them out of jail, why would we put seven year old children in jail?

In fact, in the 84 resolved Florida cases this year involving the arrest of a young child, no charges were pressed. Most of the time, charges can’t be pressed because they are

Since most cases involve just a outlying event where a child, for whatever reason, became stressed and lashed out, there is rarely much to try them for anyway. If there was going to be law suit, it would be against the parents, not the child.

When small children are arrested, often times they are first taken to a hospital before the police station. Under the Florida Mental Health Act of 1972, people can be involuntarily institutionalized if their behavior meets specific standards that would make you fear they had mental illness.

These kids are often taken to the hospital to see if there is actually something wrong with their brain that would cause them to lash out in the way that they do. We want to make sure that they are getting the help that they need, and the last thing we want is for the kid to be charged with something that could affect their entire life.

Why Would These Kids do Things to Get Them Arrested?

At ages six to eight, kids are going through some of the most dynamic stages of their brain development.

When they are younger, children’s thoughts are government more by fantasy. They don’t quite have a complete grasp on things or how certain events connect. When they hit about six years old, they start to focus more on logic, and begin to form ideas about the “right” way to do things.

Of course, the process of converting totally from fantasy to logic takes several years. When developing opinions and performing tasks, children of about seven years old, will constantly switch back and forth between the two schools of thought. This can get a little confusing.

So when a teacher asks a seven year old to stop playing with food, he has two conflicting ideals battling for dominance inside his developing brain.

On one hand, the child is thinking that the right thing to do is to listen to his teacher. On the other, he is enjoying playing with his food (perhaps he invented a new game) and he wants to keep devoting himself to the task at hand.

Confused, he may respond incorrectly, and when taken from the lunchroom, he may become frightened because he simply doesn’t understand why he is in trouble or how he should process this information. So he lashes out.

Another important thing about the development of a seven year old’s brain is that they are still more “animalistic,” for lack of a better term.

They are young, and are still operating under the fight or flight response. When they see something that confuses or frightens them, they respond in the form of knee jerk reactions. They lash out to protect themselves. Their brain doesn’t realize that they are actually in no danger.

So what does this rash of arrested six and seven year olds mean for us as a society?

Well, the first thing to understand, is that kids don’t actually get arrested willy nilly. It’s not an epidemic or really even a new progression in police work. Mostly, the arrests are centralized in Florida, and we all know how crazy the news is down there. Plus, in the United States, there is an average of 10.5 million arrests per year. One hundred kids is a mere fraction of a percent in comparison.

Really the only thing threatening a peaceful, moral mindset of our society is the attitude that leads to the arrests in the first place.

When a child becomes inconsolable or violent, many adults don’t know how to react. If an adult became violent, we know that we can tackle them to the ground to stop them. We can’t do that to a child, however, because they are too small and likely don’t understand what they are doing. Unsure of how to proceed, many just call the police, and in effect, pass the blame on.

When I was a nanny, whenever a child started going crazy, I spoke to him calmly, and asked him to leave. Sometimes I would ignore him (depending on whether it was safe to do that or not) until he got it out of his system. We had a special pillow he could scream into. There were lots of ways I was able to avoid an uncontrollable situation.

And always after his fit, when he was calm enough to talk, I would sit him down and talk to him about what he did and try and get him to understand enough about himself to avoid having one again. I made each tantrum a lesson.

Really, what it comes down to is teaching your kid right from wrong, being calm, and knowing them well enough to correctly determine what might lead to a tantrum or violent outbreak.

Another problem is how kids come to view police officers. Police officers are there to help, but often they are painted as criminals. We want our kids to run to police officers if they need help, not be afraid of them. We need to stop threatening our kids with arrest, and instead show them that the police can be trusted to help.

So even though the arrest of small children is not really an overarching problem, we need to be careful that the mentality that leads to their arrest doesn’t poison our morality.

What can kids get arrested for? Children, most often teenagers, can get fined or sent to juvenile detention for a number of crimes. The most common ones are: 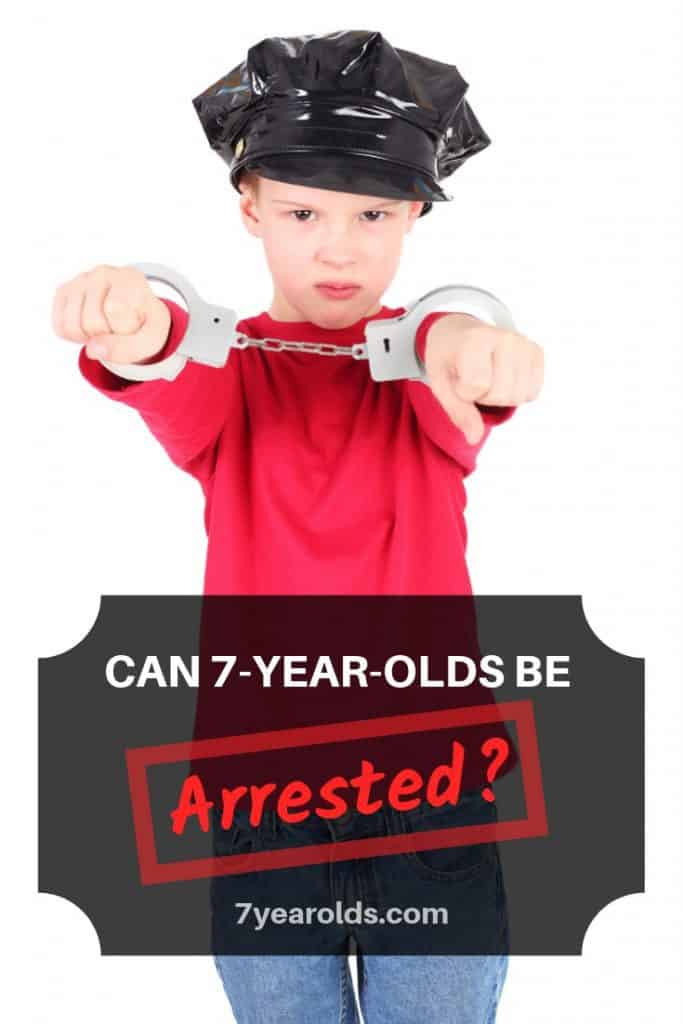