A FREE IQ test is not going to be the most excellent measure of your 7-year-old’s IQ. However, I’ve done some research that will help you get a good feel for how smart your child is.

How accurate are FREE IQ tests?  Real IQ tests have several hundred questions and take over an hour to complete. They are designed by people who have PhDs in psychology and have questions usually including analysis, numbers (math), syllogisms and rotating shapes. This allows whoever is giving the test to judge what level any given person is on.

IQ tests measure intelligence based on the general population who have taken the test.  A sample of the average 7-year-old intelligence would be needed. We don’t have that, so we’ve made it a little simpler.

What’s on an Average IQ Test?

A real IQ test has four different categories used to measure different parts of how your brain works. All these categories are common for even the

Before we begin the IQ test, I’ll explain what each part is and what it is determining.

(1) Analysis: Focuses on your ability to aptly analysz data and situations.

An example of analysis would be: “Fish is to water as a bird is to ……..” Of course, this one is pretty simple. The answer would be the sky. In an IQ test, the questions might get gradually more difficult for score purposes.

However difficult, they will be relatively similar questions on different subjects.

(2) Number series: This usually deals with discerning the next number in a sequence.

The numbers are given to you- now figure out what the next number in the sequence is supposed to be.

The answer is 20. The numbers are counting by twos and skipping each even number that is in between. This would be an example of a number series.

(3) Syllogisms: This deals with deductive reasoning and your capability to retrieve information which is not necessarily said but inferred.

Syllogisms test your logic. What would be the logical answer in regards to this question or group? Here is an example:

Which one of these statements must MOST likely be true if the above phrases are also true?

A) I eat fruit snacks only if they are naturally flavored

The answer to this would be (C). I like fruit flavored snacks because fruit snacks have a fruity flavor. Everything else cannot really be determined from the information that was given.

Both were related to each other without being deliberately saying it in a sentence. It’s all about deductive capability when it comes to syllogisms. Some are harder than others.

(4) Rotating Shapes (Spatial Intelligence): This refers to the ability to comprehend three-dimensional images and shapes.

For example: if you were to have a cube with different shapes and designs on each side. You will have to decide what the shape will look like if you turn it a certain way; without turning it!

Being able to read a map or be able to tell where you are is a form of spatial intelligence. Some people are really good at reading maps and then there are other people who aren’t.

“Your IQ score is a description of where your test score fell in relation to the greater population.”

A great way to test your child’s intelligence would be to have them take the test once, and then a second time with different questions to see how well they’ve improved.

Testing children against their own intelligence is a good way of showing you how smart they are. It also is a good way to see how much progress they are making in their education.

You can make your own and gradually make the questions harder and harder as they grow. You could do it each month, or you could do it once every three months.

Just be sure that there is enough time in between each to give them a chance to improve or you won’t see much of a difference in their growth.

IQ tests really aren’t the best judge of intelligence unless they are done by a professional. But, the methods give in this post are the ones used by psychologists.

I’ve created my own IQ test questions for you to use in testing your 7-year-old’s IQ. I’ve tried to utilize psychology resources to form the questions. I’ve made it as short as possible so as not to take too much of your time, but I’m confident this will help gauge your child’s current academic level.

There are 20 questions which cover each category: analysis, number series, syllogism, and rotating shapes. Each one has about 5 to 6 questions each.

Below the test is the answer sheet and a guide for you (the parent) to gauge how well your child does in each category.

This test is smaller than a real IQ test, so it won’t be a perfect gauge of your child’s intelligence. Some of the answers will require you to write things down for after the test.

2. (Parent) Grab a couple of dice. Stack them on top of each other.

Pick a side and ask your child to draw on a piece of paper what the side you chose would look like. (Draw the answer on a separate piece of paper and keep it with you until the end)

3. Car is to parking as an airplane is to…

4. Which one of these statements is MOST likely true if the following phrases are also true? All cars have wheels. I have a car.

A) I am a good driver

B) Cars are fast

C) My car has wheels

5. Which one of these statements is MOST likely true if the following phrases are also true?

The potatoes are either boiled or mashed. They are not mashed.They are _____?

8. (Parent) Grab those dice again! Stack 3 of them on top of each other this time, picking a side you wish your child to draw.

Set aside the correct answer on the piece of paper you used for question #2.

9. Lucy has three brothers and two sisters. Lucy is not the youngest or the oldest. She has two siblings older than her, and none of them are her sisters. What number is Lucy?

12. (Parent- draw all four of these shapes on a piece of paper) Which one does not belong?

13. If Ron has 5 oranges and he sells 3 of those oranges to Billy and then eats one, how many oranges does he have left?

15. Phone is to texting as computer is to…

16. If the sun rises in the east and sets in the west, where does it not rise and set?

A) Up and Down

B) East and South

17. (Parent) Pull out a piece of paper and draw a square, circle, and then a triangle.

Repeat the process until you have three of each. Ask your child what would come next.

18. Pull out the dice one more time. Allow your child to examine the dice. Put four in a row and ask your child to draw what’s on the opposite side of each one.

For a more accurate measure of your child’s intelligence, TestingMom.com has a psychologist certified practice IQ test.

How Are IQ Tests Measured?

A man named Lewis Terman developed a proposed measure/scale for human intelligence. Each score will tell you what range of intelligence you fall into.

How high can a 7-year-old’s IQ be? A 7-year-old’s IQ is measured by what should be known by that general age group at that time. A 7-year old’s IQ can be just as high as someone who is older and smart, but it will be compared to their age group.

For example, you could have an adult and a 7-year-old who have the same IQ. However, their IQ would be in comparison to those who are the same age.

Where can I find a certified IQ test? Funeducation.com has an IQ test which is PhD-certified. 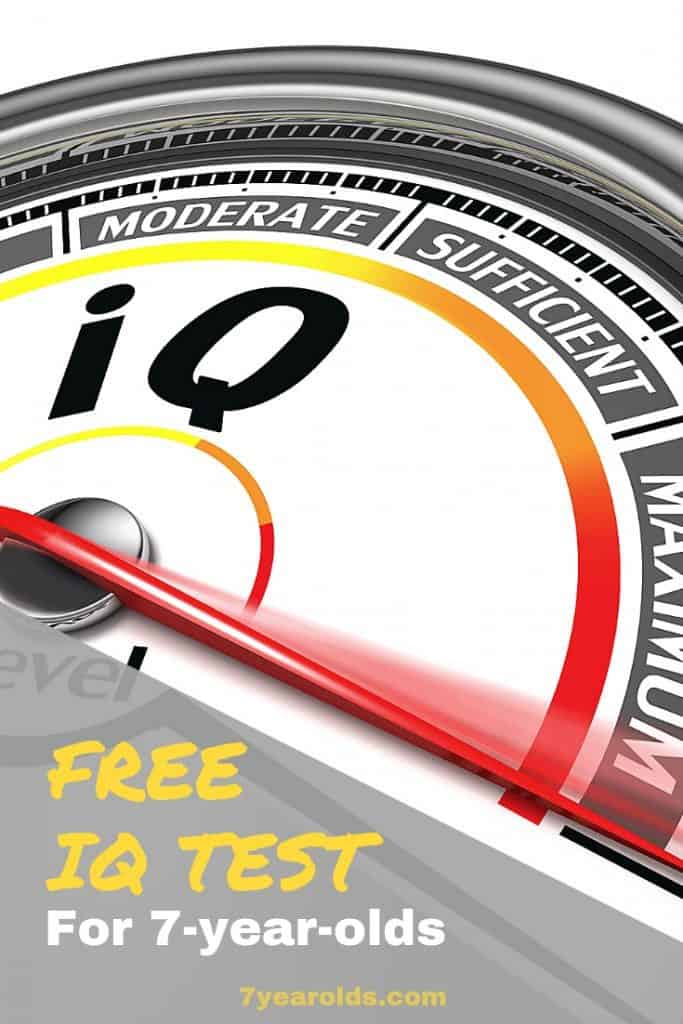 I'm from a very small town in Utah, United States. I come from a family of ten children. I can fluently speak Portuguese and lived in Brazil for about one and a half years. I'm currently studying to become a more educated human being. Hopefully, I can make a career choice that will one day be of some great use to me. For now, I'm happy being a Creator.

How Much Should a 7-Year-Old Weigh?

Is It Normal If a 7-Year-Old Hasn’t Lost Any Teeth Yet?

The 5 Best Baseball Gloves For A 7-Year-Old

The 5 Best Power Wheels For A 7-Year-Old

The 5 Best Outdoor Toys For 7-Year-Olds

The 5 Best Card Games For 7-Year-Olds

The 5 Best Polaroid Cameras For A 7-Year-Old

This site is owned and operated by Elli & Tee Inc. 7yearolds.com is a participant in the Amazon Services LLC Associates Program, an affiliate advertising program designed to provide a means for sites to earn advertising fees by advertising and linking to Amazon.com.