Movies are a huge part in spending time together as a family, but when you have seven year old kids, your movie choices are often limited. So when Friday movie night rolls around, things can get a little difficult, at least more than usual (I mean, has there ever been a time when the whole family agreed on a movie anyway?).

Of course, parent discretion is advised, and every movie should be treated as a case by case basis. The individual child must be considered as well. I know my brother could watch Lord of the Rings when he was eight, but I had to wait until I was 12. Each child is different.

The Motion Picture Association of America is the entity in charge of creating the standards and ratings for each movie that is released. The ratings are as follows:

For seven-year-olds (again, depending on the individual seven-year-old), the best ratings are G and PG. There are some cases where PG-13 are appropriate, like Harry Potter, for example. However, it is best to stay on the lower end to ensure that your child is not exposed to content that is too mature for them.

Animated movies, or cartoon, are movies that are made without real sets or actors. Usually, they are drawn or computer animated, but this genre also includes clay-mation. Of course, not all animated films are kid’s movies (Sausage Party, for example, is a cartoon marketed towards adults).

Animation helps kids keep reality separate from the world of make-believe. It’s harder to get nightmares if the show only portrays cartoon animals (unless, of course, it’s claymation Nightmare Before Christmas, that movie had me scared of the boogeyman for months).

Animated films also usually have a more innocent theme. They are often marketed towards families and have family friendly content. They focus on themes like friendship, family, loyalty, and bravery. They have fun adventures that introduce kids to the concept of conflict while keeping it age-appropriate.

Some animated films that would be great for seven year olds include:

Disney has prided itself for decades on being the lead company in family-friendly movies. They produce animated movies as well as live action movies. Disney has a wide range of movies that they produce, and not all of them would be appropriate for children under seven years old.

The movies that Disney are most famous for are the Disney Princess movies. They continue to pump out new adaptations of fairy tales for years, and when they run out of ideas, they just start turning old movies into live action ones.

Disney princess movies are full of heart-warming themes for you and your child to enjoy. They are about love, bravery, finding yourself, and the ultimate triumph of good over evil. Quite a few of their villains show complicated back stories that teach kids that you can’t always judge someone at face value because everybody has struggles that we don’t know about.

The live action movies often have more complex storylines than the animated movies do. These movies might be less suitable for seven-year-olds. If the story is too confusing, they could get overwhelmed or bored. Fantasy violence could make them curious or paranoid.

Each child is different, just as each movie is different. Stick to your parenting values. If you feel that your child should not be watching a movie, even if it is a Disney movie, then don’t let them watch it. Other people may get on your case about it but just trust your gut. Your gut is usually right. And it’s your kid, not their’s.

Some Disney movies that would be great for seven year olds include:

Family-friendly movies can sometimes end up being rated as PG-13 movies. However, some of those movies I would argue are still appropriate for children who are seven years old. Once again, it just comes down to your own gement and the individual child.

This need to balance the different needs of all the members of a family often leads to material that is stuffed full of innuendos or references that the parents would enjoy and that would go right over the kids’ heads. Just watch The Cat in the Hat again as an adult, and you’ll see what I mean.

If you as an adult don’t want to hear that sort of content, then don’t worry! There are still plenty of family-friendly movies that don’t include adult jokes.

Many family-friendly movies are also comedies. They are meant to help the whole family laugh together. Laughing together helps build strong relationships, and leads to no shortage of inside jokes. I know quoting funny movies was the favorite pass time of choice in my house at the dinner table and during car trips.

Watch out for comedy films that turn out to be full of crude humor. I have been bitten more than once on that. In my opinion, you should avoid Adam Sandler movies if you want to avoid crude humor that might affect your child.

Other family-friendly movies are more like dramas or, as I like to call them, “feel good” movies. They aren’t necessarily funny, but they have fantastic story lines that I know you adults would enjoy.

Your kids, especially if they are as young as seven, might not get the , so you might have to hold off on these film until they get a little older.

Dramas and “feel good” movies often deal with more intense themes, like poverty, racism, and real-life hardships of real-life people. These movies can be a good way to start teaching your child how to deal with their own trials in life.

There are usually very good messages, like the importance of family and the value of loving yourself.

Some great family movies include:

Break Out The Popcorn

Now that you have a good idea of what movies your seven-year-old can handle watching, go ahead and  the popcorn, get out the ice cream bowls, layer on those blankets, snuggle into those bean bags, and have a great movie night!

What shows are appropriate and fun for seven-year-olds to watch? Seven-year-old kids start to want more out of their TV shows than Peppa Pig can offer. You’re going to have to pick shows that are more complex and have more relatable characters. These shows will be rated TV-Y, TV-Y7, and TV-G. They can include Scooby-Doo, Fairly Odd Parents, and Phineas and Ferb.

Does watching TV lead to violence in kids? While watching TV does not directly cause children to become violent, there has been a connection made between the kinds of shows that kids watch and their resulting behavior.

If kids watch violent shows, they can start to see violence as a way to solve problems, become desensitized, or even begin to imitate what they see. This just stresses the importance of good parenting and monitoring what your kids see on TV. 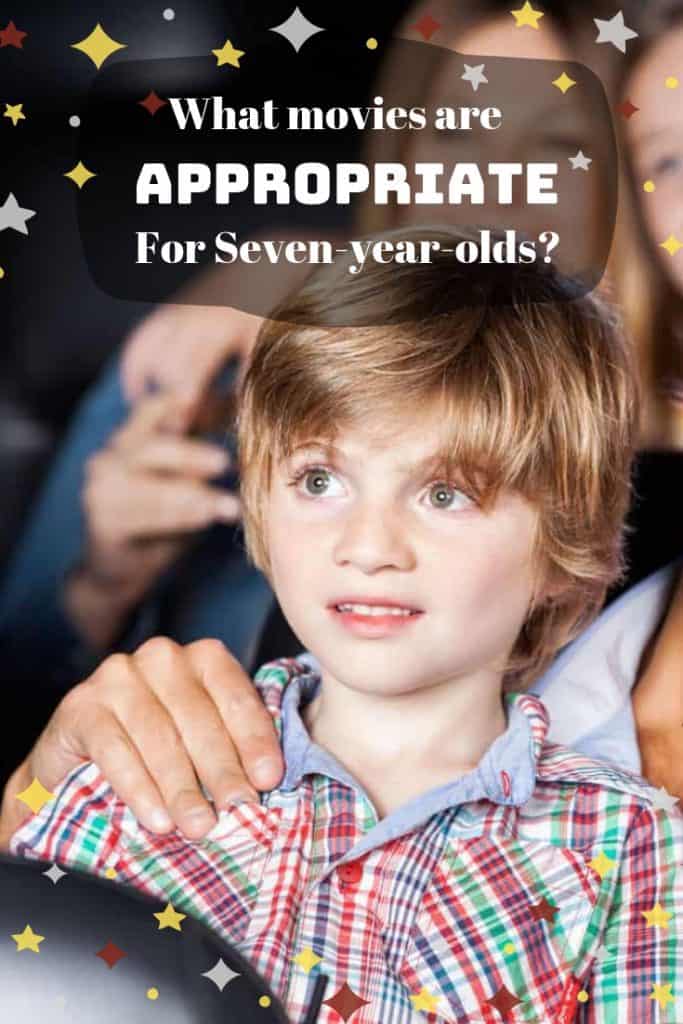